by Matt Jelly, In The Neighbourhood.

Some time has passed now since Hamilton debated the Casino issue- over a year ago, City Council voted in favour of the existing racetrack site at Flamboro Downs as Hamilton’s preferred location for an Ontario Lottery and Gaming Corporation facility. Council’s vote in Spring 2013 came after a long drawn-out debate, which focused primarily on allowing a Casino operator to set up shop in Hamilton’s Downtown core. Technically, Council’s motion still left the door open to this possibility in the future; however Premier Kathleen Wynne’s government has since incorporated Racetracks into the OLG modernization plan going forward. Council however, did not vote to take downtown off the table at the conclusion of the debate.

Having been very involved in this debate, I did a series of Freedom Of Information Requests at City Hall, between lobbyists pushing for a Downtown Casino and City Councillors and Staff. My first FOI requests were filed in December 2012, and a second FOI was filed in July 2013.

The first requests took 8 months to come back to me- I received documents in July 2013, which detailed private meetings between Senior City Staff, and “RockHammer” Casino lobbyists PJ and Peter Mercanti. When I received the first batch of emails, I filed a second series of FOI requests, asking for emails between lobbyists, councillors and staff for the first part of 2013.

Some of my requests were appealed by an affected 3rd party, and for over a year have been tied up in that appeal. In recent weeks, an arbitration process began with the Information and Privacy Commissioner of Ontario on this appeal, and new documents have been released to me. 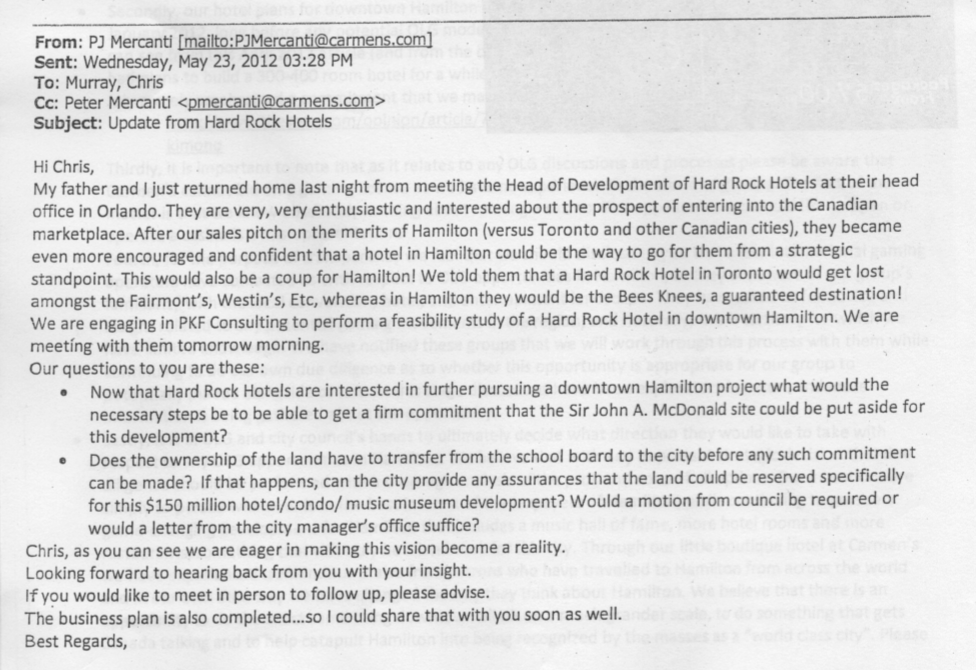 To his credit, City Manager Chris Murray informed Mr. Mercanti that there is a property disposition process at the Hamilton Wentworth District School Board that must be followed, and if in fact the city did gain ownership, they’d have to sell the land through an open and transparent process. Sir John A. Macdonald Secondary School is slated to close at the end of the 2014-15 school year. 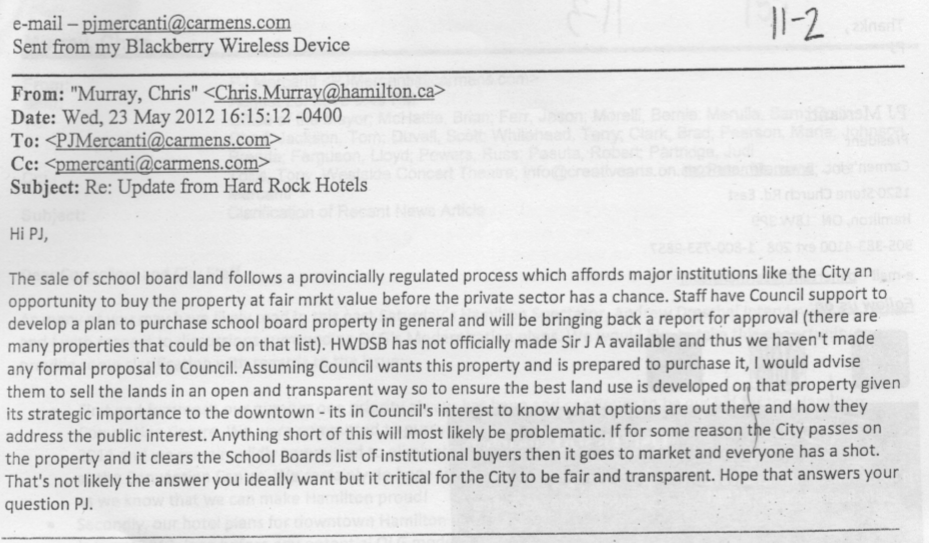 Today, a full 14 months after I filed the second set of FOI requests, I received some (not all) of the documents being appealed by a 3rd party. This package not only confirmed Sir John A. Macdonald school was the preferred location, but included very detailed architectural renderings for the property at York and Bay- which is still an active highschool. 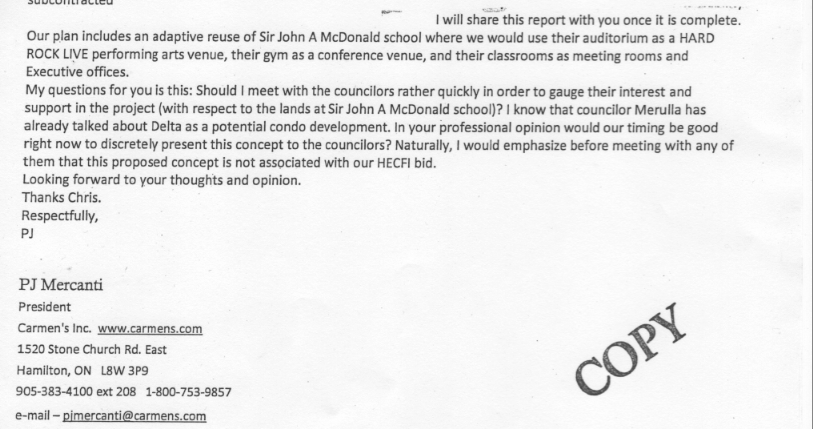 In an email dated June 6th, 2012, from PJ Mercanti to City Manager Chris Murray, Mr. Mercanti detailed the plans for the School site- converting the auditorium into a Hard Rock LIVE performance venue, the gym as a conference venue, and the classroom as “meeting rooms and Executive offices.” The renderings, by Toronto Architects Romanov Romanov, show the current school still in place, with a 44-storey Hotel, Condo and Casino development on the current football field. 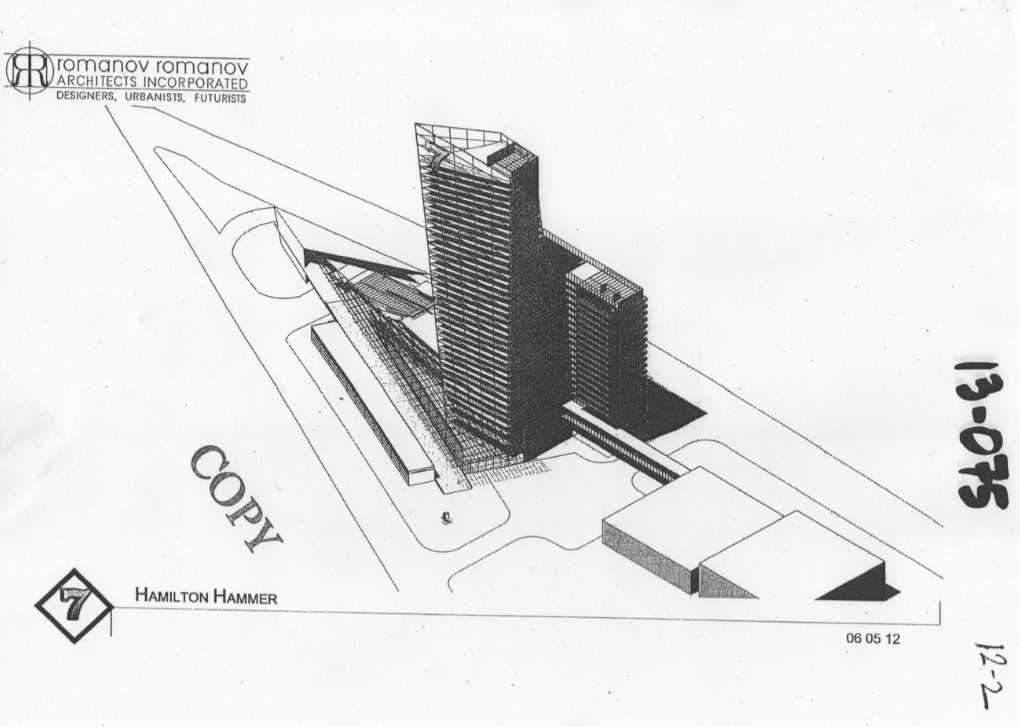 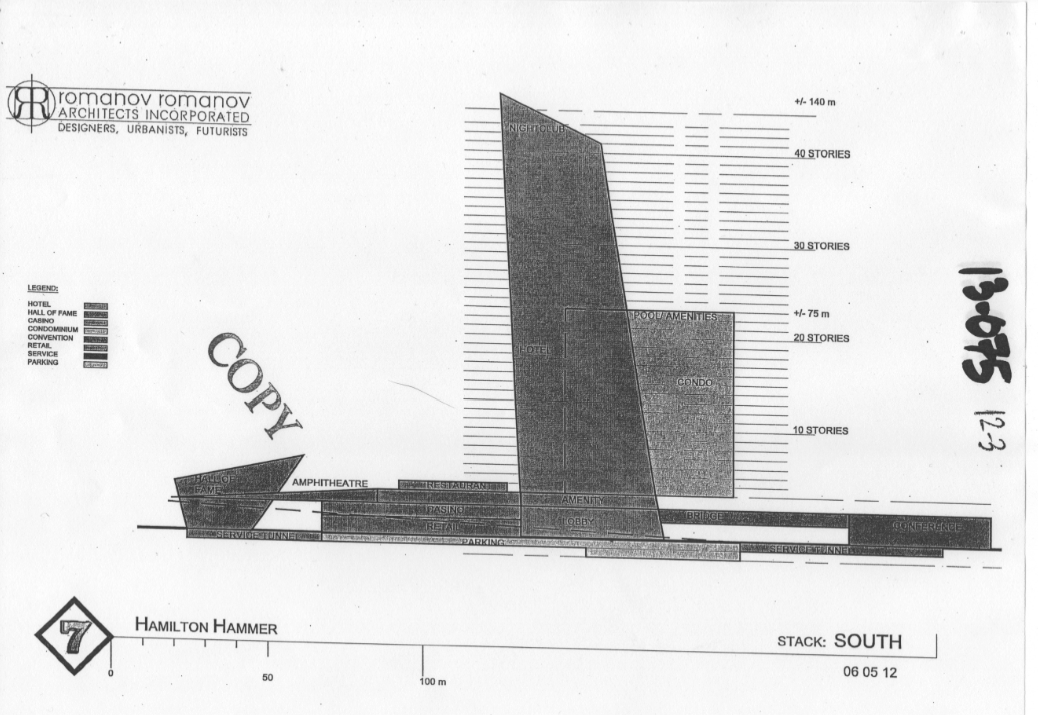 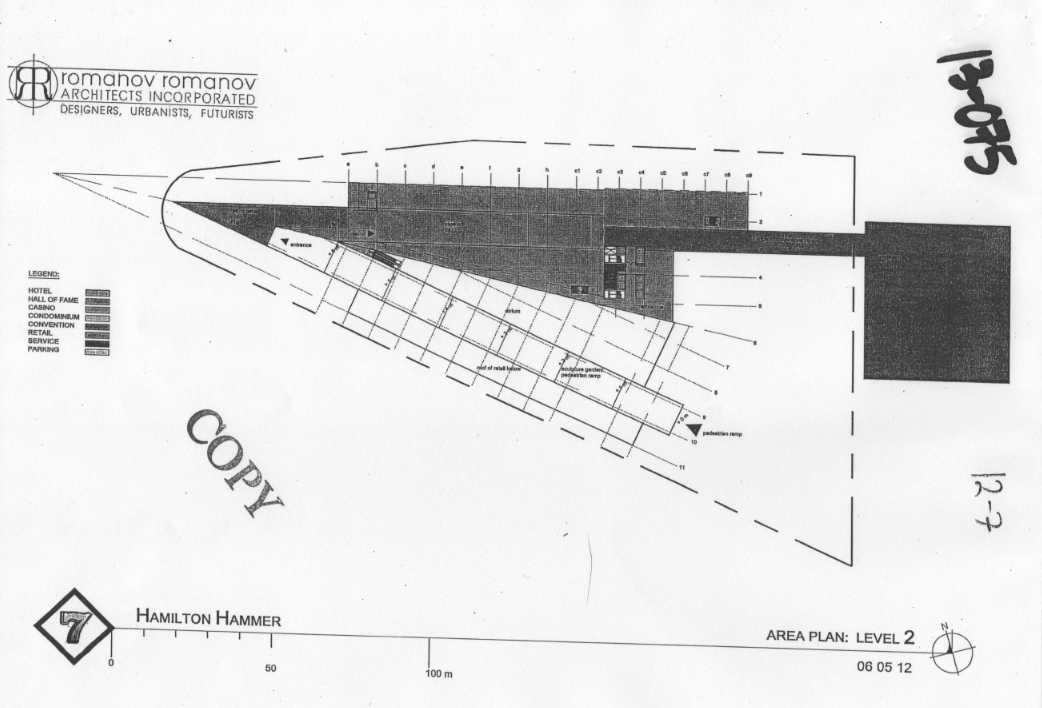 Sir John A. Macdonald Secondary School is still an active school. However, the Hamilton Wentworth District School Board is undergoing a widespread school closure process in all parts of Hamilton, with plans to close Sir John A. Macdonald and Delta Secondary schools at the end of the current school year- selling these properties in order to replace them with one new secondary school in the lower city. This is also the case on Hamilton mountain and Dundas. Our Public School Board Trustees, most of whom are not seeking re-election this year, have voted in favour of these closures because these schools are underutilized, and the Ministry of Education’s funding formula is based on enrolment.

Sir John A. MacDonald Secondary School is slated for closure at the end of this school year.

While it’s true that some schools in the City have enrolments as low as 50%, Sir John A. Macdonald is a School with over 70% enrolment, and is projected through the next 10 years (if the school remained open) to stay at that enrolment rate- not far off from an ideal enrolment rate. SJAM’s enrolment actually increased in 2012. Neighbouring Westdale Secondary School has an enrolment rate above 100%, meaning the school is overcrowded. Changes to programming and catchment boundaries might have saved Sir John A Macdonald School from closure. It remains to be seen whether a largely new Board of Trustees can reverse this decision.

The fact that Casino proponents already had detailed architectural renderings for Sir John A Macdonald School long before it closed should give us pause. So should the fact that these renderings had been developed well before any public debate had occurred on the issue of a Casino.

The Hamilton Wentworth District School Board is undergoing one of the largest dispositions of public land in recent memory. What becomes of that land is anyone’s guess- while the City and other educational institutions may buy these properties up for other uses, that can’t be done in every case. These are very large and very valuable parcels of assembled land, which the school board is required to sell at fair market value.

This isn’t just an issue for the downtown core- this highlights an issue that many neighbourhoods will soon be facing. What kind of developments will take the place of schools, once the HWDSB’s plans are complete? What kind of plans are being drawn up for these properties before the schools even close?

These emails also highlight the need for an effective Lobbyist Registry at City Hall. Citizens should be aware of the contact between commercial interests and officials at city hall- knowing who is lobbying staff and council, and what they’re lobbying for. It’s clear that some senior staff and potentially council were aware of these plans- it may have been helpful to the debate if those pushing for a Casino were more upfront about their intentions. It would also be helpful to know which councillors were made aware of these plans. Thankfully the majority of council recently voted in favour of a Lobbyist Registry and the office will be established next year- it’s up to our next council to make sure this office is an effective one.

Half of our council was prepared to let this happen- a motion to take downtown off the table as a Casino location would have been defeated with a tie vote. Instead, council left that possibility open.

“The Best City To Raise A Child” indeed.

This entry was posted in Blog Post. Bookmark the permalink.